Poll figures released today, come after the Federal Government announced plans to amend Australia’s environment laws in a bid to fast-track applications for developments such as new mines and land-clearing as part of its post-COVID-19 agenda.

“The Government thinks it can use the cover of COVID-19 as an excuse to scrap environmental protections, but this polling shows they are barking up the wrong tree.

“The poll results show little support for the Morrison Government’s attack on the environment, with respondents rejecting the push to cut ‘green tape’ before the scheduled 10-year review of environmental laws is even complete.

“Australians have just experienced and witnessed overwhelming destruction of our environment with the catastrophic bushfires and so many of us have turned to nature to help us through the Coronavirus pandemic.

“They know our precious wildlife is endangered and our pristine wilderness and native bushland is being pummelled by miners and developers, and they want it protected.

“There was more than 1700 threatened species in Australia before the bushfire crisis including our beloved koalas and Victoria’s faunal emblem the Leadbeater’s possum, and with so much more habitat lost from the summer fires, many more species are expected to now be endangered.

“The EPBC Act is already failing in its purpose of protecting conservation and biodiversity with flora and fauna becoming threatened, endangered and even going extinct.

“Fast-tracking applications will do even more damage. As it is, only about 2 per cent of applications under the existing laws get knocked back.

“Worse still, many applications to clear potential habitat for threatened species and ecological communities are not even referred to the Federal Government for assessment, which has resulted in 7.7 million hectares being cleared between 2000 and 2017.

“Australia is losing more and more of our precious environment and the public want change that protects wildlife and habitat.

“The public will not fall for the lazy argument that sacrificing the environment is necessary for economic recovery, particularly when so many industries like tourism, accommodation and hospitality – some of the hardest hit by COVID-19 shutdowns, depend on our environment.

“This poll shows only 5% support the Government’s plans to weaken environment laws. It’s time the Morrison Government started listening to the people rather than the mining lobby, and protect what makes Australia such a great place to live and visit.”

Question: The Federal Government wants to make the process for approving developments and projects faster by changing laws that protect the environment and wildlife. Under the new laws, do you believe the environment and native wildlife should have …? Base: Australians 18+ (n=1,008) 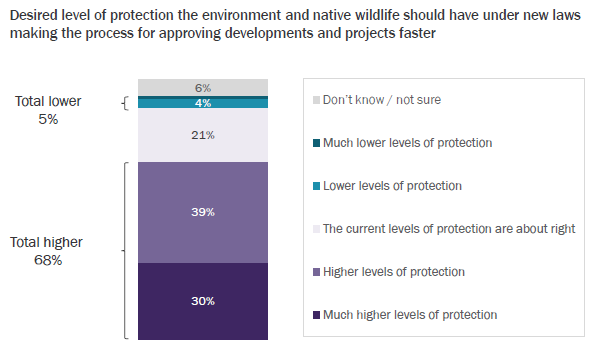 The national poll of 1008 adult Australians in all states, was commissioned by Senator Sarah Hanson-Young and conducted by Lonergan between 30 April and 4 May 2020.

With communities in lockdown and cases on the rise, Greens call for urgent action to lift First Nations vaccination rates

Safety at work critical for living with Omicron