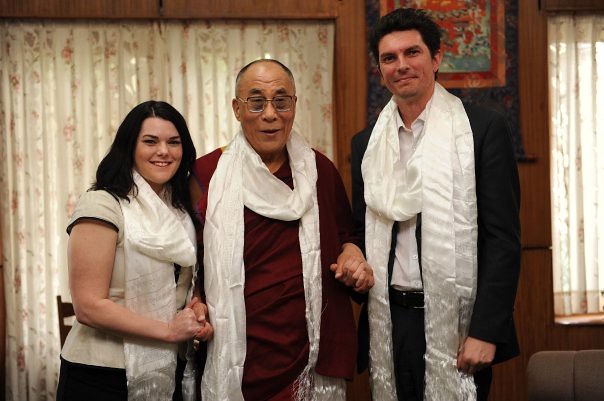 Senator HANSON-YOUNG (South Australia)
(1.21 pm)—I want to take the opportunity today to reflect on a parliamentary delegation that I participated in over the winter recess. It was the first delegation of parliamentarians to visit Dharamsala, the home of the Tibet parliament in exile. While I acknowledge that it was not an official parliamentary delegation, it was a delegation of parliamentarians who wanted to see for themselves and hear directly from the Tibetan parliament in exile about the struggles that they face daily and the political issues involved in giving Tibetans the freedom and access to human rights that they should have. The delegation was made up of the Parliamentary Friends of Tibet and was hosted by the Tibet Information Office. Our visit coincided with His Holiness the Dalai Lama’s 74th birthday, and it was very special to be invited to that. Our cross-party delegation included me, my colleagues Senator Scott Ludlam and Senator Nick Xenophon, and friends from the other place— Melissa Parke, Michael Danby and Peter Slipper.


We were accompanied by members of the Australia Tibet Council, who were kind enough to be our tour guides. We all learnt a lot about the day-to-day issues and the political struggles faced by Tibetans, both in Tibet and living in exile around the world. Dharamsala has played host to His Holiness the Dalai Lama, his supporters and the Tibetan community in exile since 1959. The community since then has flourished. They have built schools, cultural centres and have even established their own parliament, despite not being acknowledged by the United Nations.

We met members of the parliament, the Speaker and the Deputy Speaker, who were wonderful hosts while we were in Dharamsala. We met the Prime Minister; high-level lamas; representatives of NGOs, youth organisations, and human rights associations; and of course His Holiness the Dalai Lama himself. We met with political prisoners—people who had experienced torture and trauma simply because of who they are, their background, their culture and their beliefs; people who had escaped, particularly since the crackdown in March 2008. We heard stories of torture, of struggles, and of parents trying to give their children the freedom they deserve. During an hour-and-a-half audience with His Holiness we heard how important it is for him and his people that we, as Australians and as members of the Australian parliament who represent of one of the oldest democracies in the world, stand strong for democracy, for human rights and for justice.

One of my favourite parts of this visit was when we went to the Tibetan Children’s Village, which comprises a babies’ nursery for orphaned children, and a primary school and high school for Tibetan students.
Most of these children were orphaned; most of these children had fled Tibet in exile, often on their own, their parents believing that the best future for them was to be smuggled out of Tibet, across Nepal and the Himalayas and into Dharamsala to be in the care and safety of His Holiness the Dalai Lama. I held a seven-month-old baby who had been orphaned since she was four months old. The Tibetan Children’s Village was one of the happiest places that we visited because it was seen to be the future of this amazing community. It was also one of the saddest because these children had been orphaned for no fault of their own but simply due to conflict, torture and the oppression of a group of people who have a strong history and culture, and who have been oppressed simply for who they are.

Many of the young people we met in Dharamsala, who have taken up positions within the community, had been through the children’s village. The Speaker of the Tibet parliament and the assistant to the Speaker had been through the children’s village. The convenor of the Tibetan Youth Congress, who had been orphaned, was educated, cared for and had grown up in the children’s village. It was, in itself, an amazing example of how His Holiness the Dalai Lama, in the face of atrocities, in the face of oppression, in the face of being silenced not just by the Chinese government but by governments around the world, had stood strong and knew 50 years ago that the best way of preserving his community’s culture, the best way of giving the next generation a chance, was to build institutions of learning, cultural development and exchange. We saw that in the children’s village, and we saw that in other places such as the performing arts centre. Through the wisdom of His Holiness the Dalai Lama and his supporters, in 1959 when the Indian government graciously gave them Dharamsala as a place in exile, this became the opportunity they needed in order to invest and preserve their culture and their community, and it has been done extremely well.

Some of the saddest things in the Tibetan Children’s Village and in the reception centre for new arrivals— Tibetan refugees—were the pictures drawn by children who had witnessed and experienced torture, shootings and abuse. These pictures were some of the most haunting images that I have taken away from my experience in Dharamsala—pictures drawn by four-year-olds, seven-year-olds, 12-year-olds and 14-year-olds of experiences that, as a parent, we would not want our children to see. It is very easy in Australia, and as Australian parliamentarians, to be in a safe, free, thriving democracy, but we have a responsibility to stand for those who are not so lucky.
The experience of all of us in this delegation meant that we all have a responsibility to come back to Australia as Australian parliamentarians, as members of our community, to stand strong with the Tibetans and to stand strong with other cultures and communities that are being oppressed and tortured by the Chinese government. We must do everything we can as Australian parliamentarians, as representatives of a country which is, as I said, one of the oldest democracies. We have the freedom to stand and speak and to ensure that this is a discussion about human rights and justice, not a discussion about being anti Chinese. We have a responsibility to stand and promote the protection of all people, young and old, Tibetan and non Tibetan, Chinese, Uygur, Australian or Fijian. We have a responsibility as Australian parliamentarians to talk about these things, to witness and to visit.
I was honoured to be invited to be on this delegation and to speak directly with His Holiness the Dalai Lama, with members of the Tibetan parliament-in-exile and with individual members of the Tibetan community, as well as with Indian parliamentarians who have accepted that their role in this is to play the gracious host to the Tibetan parliament and community in exile.

I believe the next step for Australians and for our Australian government, for our Prime Minister and even for this chamber is to offer a hand of graciousness to His Holiness the Dalai Lama and invite him to visit our chamber of parliament—a parliament of one of the oldest democracies in the world, standing tall, preserving not just our right to stand and speak freely but acknowledging that we will fight and support the right of others to do the same in their homelands and in exile.

I would like the young Tibetans who I met— whether they were born in exile or orphaned because they escaped Tibet—to be able to go home one day, understand where they came from and feel connected to their heritage and culture, just as I would if my own daughter had experienced such atrocities. It is time for our government, for our Prime Minister, for our parliament to open the doors to His Holiness the Dalai Lama and say, ‘Yes, we can stand with you.’ This is about justice and human rights; it is not just about politics.

This is about doing what is right and using the opportunities that we have. Here in Australia we have an amazing opportunity because we are able to speak freely and stand strong. We need to help others do the same.

More photos of the trip can be viewed here.